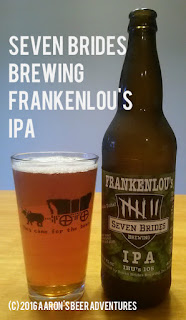 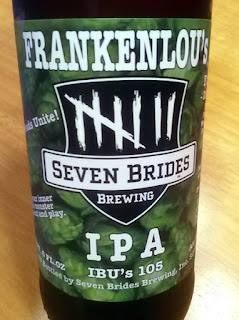 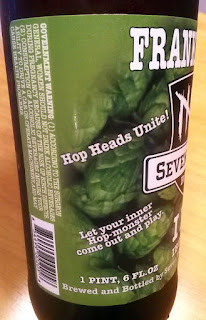 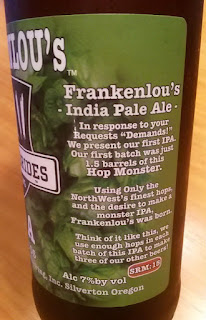 What's on the Bottle: "In response to your Requests "Demands!" We present our first IPA. Our first batch was just 1.5 barrels of this Hop Monster. Using Only the NorthWest's finest hops, and the desire to make a monster IPA, Frankenlou's was born. Think of it like this, we use enough hops in each batch of this IPA to make three of our other beers!"

What's on the Website: "Hoppy and bitter IPA with a citrus and floral nose." Read more about their beer and menu here!

Where distributed: As of June 2016, Three Creeks Brewing ships its beer only in Oregon and Southwest Washington. Visit Three Creeks' site!

Smell (25%): Interesting combination of stonefruit (peaches, perhaps?) and what amounts to a sour apple-like aroma. Generally sweet fruity and floral with some malt otherwise. 4/5

Taste (40%): The sour apple aroma mentioned above is also in the taste. Hoppy-pine, floral, and virtually weed-like on the aftertaste. Yeah, I went there with the marijuana reference. Also a bit malty and dank. It's not offensive to me, but others may not like this so much. 3.5/5

Mouthfeel (10%): Medium-bodied, some carbonation. Sticky-malty on the tongue. 4/5

Overall (20%): An...interesting IPA. I basically got this during late summer / early fall as the Halloween pumpkin beers were increasing on the shelves, so rather than follow that path, I stayed the course on the IPAs. The name is pretty cool, while the flavor and aroma left me looking at the beer wondering what the heck I just drank. It was cheap at under $4 (on sale), so it was at least worth the buy for beer science purposes. 3.75/5