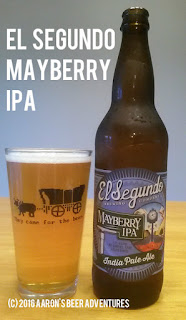 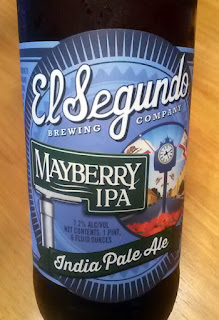 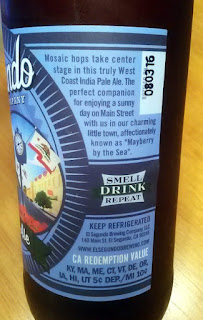 What's on the Bottle/Website: "Mosaic hops take center stage in this truly West Coast India Pale Ale. The perfect companion for enjoying a sunny day on Main Street with us in our charming little town, affectionately known as 'Mayberry by the Sea'." Read more here!

Where distributed: As of September 2016, El Segundo Brewing has started shipping their beer to Portland, Oregon, in addition to select markets in Southern California. At least in Southern Cal, they give a 6-week window for any beers on shelves, and will restock any beers that are past 90 days old. Check to see whether this beer can be found in your area!

Smell (25%): Significant tropical from Mosaic hops. Passion fruit and complementing malt. Pretty much what I wanted. 4.75/5

Taste (40%): Hop-forward, passion fruit and tropical all the way. Extremely drinkable. If there was any octane, it enhanced the drinking experience. Amazing flavor. 4.75/5

Mouthfeel (10%): Medium-bodied, some carbonation. Not too juicy and not too dry on the tongue. 4.5/5

Overall (20%): A world-class Double IPA. Easily the best of the three beers I've rated from El Segundo to date. Depending on my mood, I'd see myself either drinking this with close friends or downing the entire thing by myself while watching the football game. El Segundo has a real IPA gem here. 4.75/5