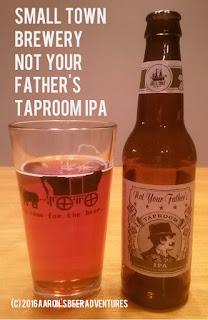 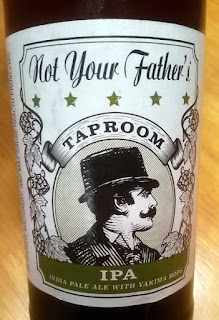 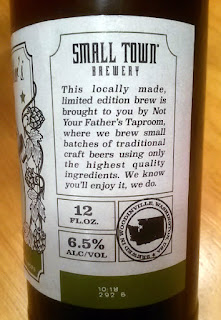 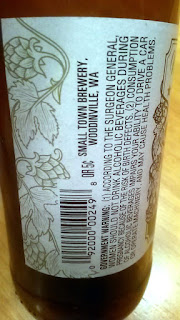 What's on the Website/Bottle: "This locally made, limited-edition brew is brought to you by Not Your Father's Taproom, where we brew small batches of traditional craft beers using only the highest quality ingredients. We you'll enjoy it, we do." Read more here!

Taste (40%): Follows the nose. Floral hits first, and lasts through the drinking experience. A tinge of tropical and pine. Getting perhaps a bit of citrus peel on the aftertaste. Bitterness controlled very well. It's fine for what it is. 3.75/5

Overall (20%): A decent IPA. After a very successful line of hard sodas, Small Town Brewery released a limited-edition IPA using Yakima hops. Fittingly, the brewery chose to release this beer in the Pacific NW first. Frankly, I found this to be a standard IPA, nothing special. While I appreciate the balance this one brings (more akin to an IPA that's not West Coast style), I've long preferred the tropical blast and hoppiness that many West Coast-style IPAs bring to the table. Still, I drank the entire bottle here, so NYF Taproom IPA is certainly worth buying to at least try. 4/5