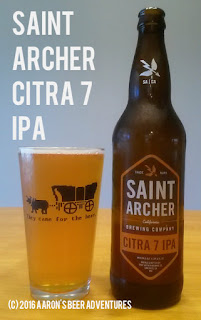 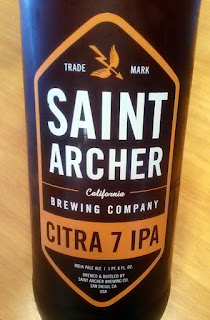 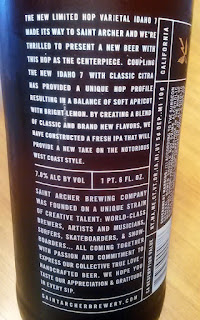 What's on the Bottle: "The new limited hop varietal Idaho 7 made its way to Saint Archer and we're thrilled to present a new beer with this hop as the centerpiece. Coupling the new Idaho 7 with classic Citra has provided a unique hop profile resulting in a balance of soft apricot with bright lemon. By creating a blend of classic and brand new flavors, we have constructed a fresh IPA that will provide a new take on the notorious West Coast Style."

Where distributed: As of September 2016, it appears Saint Archer beers may only be found in California. If they are in other states, they do not make its way to the Pacific NW (for now).

Taste (40%): Hoppy, slight dank, and controlled citrus-bitterness from the start. Getting tangerine, lemon, orange, grapefruit, and mango. Awesome flavor throughout. 4.75/5

Mouthfeel (10%): Medium-bodied, some carbonation. Nice controlled citrus-bitterness on the tongue. A bit sticky and dry. 4.25/5

Overall (20%): An outstanding IPA, bordering on world-class. The tropical aroma and bright citrus-bitter flavors really make this a hit with me. As a side note, MillerCoors bought Saint Archer in September 2015, so one would hope I'd be seeing this beer more in my neck of the woods. Figure as long as the recipes stay intact, I'll have no problems with this. Citra 7 may be a specialty beer (since it uses the new Idaho 7 hop), but I'd expect to see this again on store shelves. 4.5/5