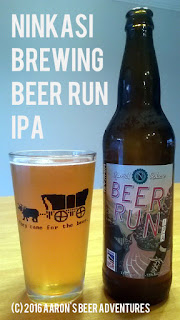 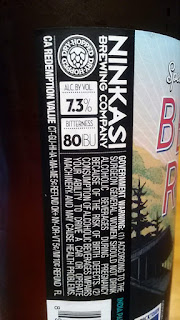 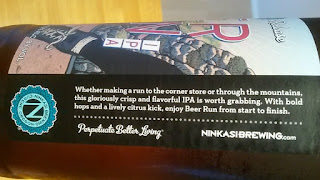 Where distributed: As of May 2016, Ninkasi Brewing ships to 14 states (including the District of Columbia) and two Canadian provinces (British Columbia and Alberta). Click here for where Ninkasi ships its beer!

What's on the Bottle/Website: "Whether making a run to the corner store or through the mountains, this gloriously crisp and flavorful IPA is worth grabbing. With bold hops and a lively citrus kick, enjoy Beer Run from start to finish." Read more here!

Taste (40%): A combination of floral, citrus, malty, and slightly dank characteristics. A bit bitter on the aftertaste, and dry on the tongue. 3.75/5

Overall (20%): A good to decent IPA. I frankly bought it more because it was a special release, and it was a good IPA for what it was. This simply did not stand out when compared to the many IPAs I have enjoyed over time, and frankly, I have had better IPAs from Ninkasi. This was just fine to me. 3.75/5