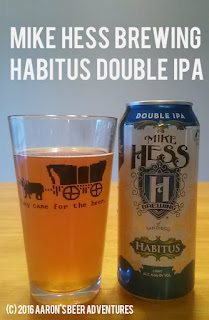 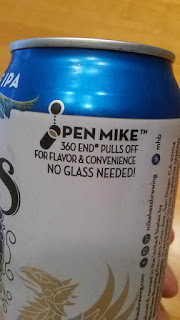 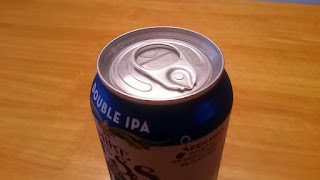 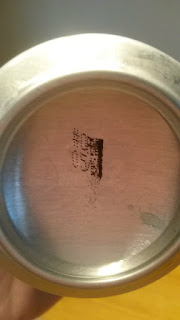 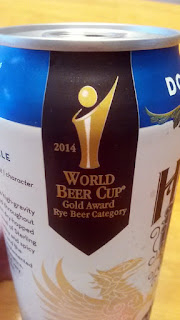 Batch Number and Package Date: Unclear. If it's the package date on the bottom, perhaps it is May 2016. 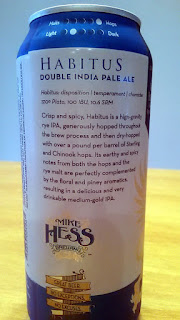 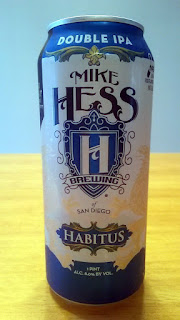 What's on the Can: "Crisp and spicy. Habitus is a high-gravity rye IPA, generously hopped throughout the brew process and then dry-hopped with over a pound per barrel of Sterling and Chinook hops. Its earthy and spicy notes from both the hops and the rye malt are perfectly complemented by the floral and piney aromatics, resulting in a delicious and very drinkable medium-gold IPA."

What's on the Website: "Winner of the gold at the 2014 World Beer Cup® in the rye beer category, Habitus is a very drinkable, high gravity, crisp and spicy rye IPA, hopped generously throughout the brew process and then dry-hopped with over a pound per barrel of Sterling and Chinook hops. Earthy and spicy notes from both the hops and the rye malt, complimented by the floral and piney aromatics." Click for more on this beer!

Where distributed: Mike Hess Brewing ships to select areas (likely just California), and generally cannot be found in the Pacific Northwest. Check to see whether you can find Mike Hess beers in your area!


REVIEW:
Appearance (5%): Started as a clear golden pour into a pint glass, but finished as a cloudy golden-orange. Possibly unfiltered. Off-white head. 4.25/5

Smell (25%): Hop-forward, some malt. Initially got mango and apple juice(?!) before settling into the usual pine, floral, and grapefruit-type aromas. Not sure if my nose was playing tricks on me, or if I simply had that long a day at work. 4.25/5

Overall (20%): An excellent IPA. For me, a notch below when comparing it to Solis Occasus, but still for me drinks wonderfully. Totally deserves its gold at the World Beer Cup. Mike Hess Brewing continues to deliver quality IPAs. One of many breweries to try when in Southern California. 4.25/5