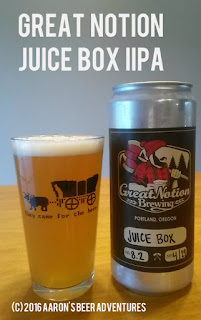 
What's on the Website: "Bursting with pungent American hops, with aromas of peach, mango, and passion fruit. Juice Box is brewed with over 4 pounds of hops per barrel, but the mellow bitterness and soft mouth feel makes this DIPA dangerously drinkable!" Click here for more!

Taste (40%): Explosive juicy passion fruit and peach from start to finish, and the malt/hop combination add that extra satisfying factor. Flavorful, creamy, and extremely refreshing. If there is any bitterness, it's minimal and attributed to the big tropical experience this beer brings. 4.75/5

Overall (20%): An outstanding Double IPA, bordering on world class. Although this was not among their very first beers released to the public, Juice Box quickly became one of my favorites at the brewery. It had more octane and all-around flavor than its Juice Jr. little brother (session IPA) while maintaining the New England-style (juicy) qualities I had been craving. Great Notion Brewing, in general, has carved its own niche in the Pacific Northwest. While other breweries before them leaned towards the West Coast or Pacific NW IPA (a more bitter and hoppy experience), Great Notion's juicier and more tropical IPAs have become a major hit. Considering they have struggled to keep the beers on tap and have limited crowler sales, I'd say that's a pretty good problem to have. 4.5/5