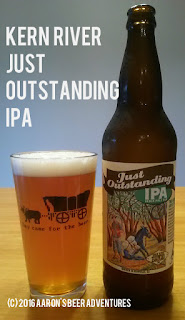 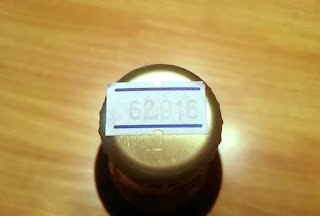 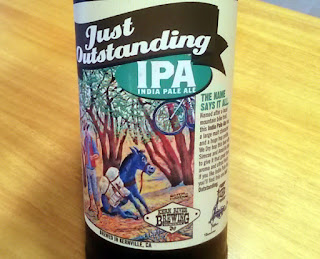 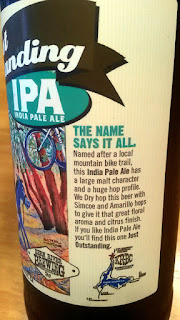 What's on the Bottle: "Named after a local mountain bike trail, this India Pale Ale has a large malt character and a huge hop profile. We Dry hop this beer with Simcoe and Amarillo hops to give it that great floral aroma and citrus finish. If you like India Pale Ale, you'll find this one Just Outstanding."

What's on the Website: "This India Pale Ale has a strong malt character and a large hop profile. We dry hop this beer with Simcoe and Amarillo hops to give it that great floral aroma and citrus finish. If you like a strong IPA, you'll find this one just outstanding." Read more here!

Where distributed: As of July 2016, Kern River Brewing only distributes their beer in California, and further limits distribution even within the state. They mainly stay within Bakersfield, Kern Valley, Ridgecrest, and Tehachapi. See if Kern River ships to your area!

Taste (40%): Hop-forward with floral and a bit of pine/grapefruit. Very smooth with just trace bitterness initially. When paired with food, the beer's bitterness may get more noticeable. Frankly, I expected more from this one. 3.75/5

Mouthfeel (10%): Medium-bodied, some carbonation. Some bitterness lingers on the tongue. 4/5

Overall (20%): A solid IPA. Still, a bit of a letdown after the rave reviews I read on Beer Advocate and RateBeer. After tasting and enjoying so many of the best from all parts of the United States, Just Outstanding has become just another good IPA that didn't stand out to me. I wanted more flavor from this one. I didn't get the strong malt and as much of the hoppy experience that the website and the bottle wanted me to believe. I don't know if I received an old batch, but I'm willing to give this another shot. 3.75/5