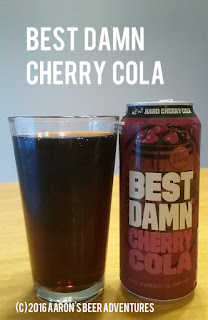 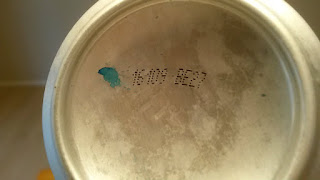 What's on the Website: "Our Cherry Cola mission is 'Put a Cherry on Top Tap.' Refreshing BEST DAMN Cherry Cola combines caramel and cola notes with a delicious cherry taste. Aged on whole cherries after brewing, the result is a flavorful take on the timeless taste of Cherry Cola. Cheers!" Click here for more!

Taste (40%): Burst of medicinal cherry flavors, with off-putting plastic. Not pleasing at all. 2/5

Mouthfeel (10%): Medium-light bodied. Some of the plastic flavor lingers on the tongue. It could be worse, however. 3/5

Overall (20%): A fair hard soda. It's been my least favorite of all the hard sodas created to date, and it's more due to the weird taste than anything else. As much as I didn't think it would happen, I prefer the Best Damn Hard Root Beer over this. The concept is great, and I certainly would love to see the Not Your Father's brand take a crack at this. For now, a hard cherry cola that I would happily drink remains elusive. 2.5/5