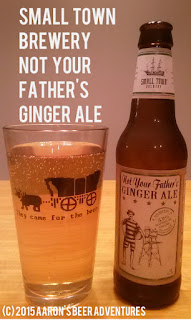 Date Purchased: December 1, 2015
Date Opened/Drank: December 2, 2015
"Best By" Date: May 13, 2016
When brewed? Year-round beer. Not Your Father's Ginger Ale released on or about December 1, 2015, after a couple months of hype. Small Town Brewery also started canning their products just a few months ago. 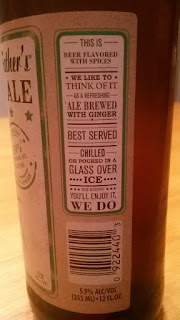 What's on the Bottle: "This is beer flavored with spices. We like to think of it as a refreshing ale brewed with ginger. Best served chilled or poured in a glass over ice. We hope you'll enjoy it. We do." Click here for more info!

Taste (40%): Again, tastes strikingly similar to actual non-alcoholic ginger ale that I've had. Zero alcohol detected. Probably again classified as a spiced ale. The ginger is front and center, yet also therapeutic, like how regular ginger ales seem to be. On a blind taste test, I'd bet very few people would be able to tell this is alcoholic. I'm sold. 4.75/5

Overall (20%): A world-class spiced beer. This one probably will play second fiddle to the critically acclaimed Not Your Father's Root Beer in my book, but it would only be a tiny notch below. Being a ginger ale fan, I all but chugged the pint glass as I typed this blog entry in. I already know people will criticize this one for being too sweet. News flash: This alcoholic beverage is supposed to replicate a soda -- which is sweet. The intent was to entice more people to buy alcoholic drinks and who probably hate the taste of beer. If you want a "regular" beer, whether it's a lager, porter, or an IPA, get that instead. This will likely cater to people who love buying wine coolers. I would caution people who are simply curious to get a single of this, or sample it somewhere; don't splurge on a six-pack out of the gate unless you know you'll love it. 4.75/5