Against the Grain Citra Ass Down 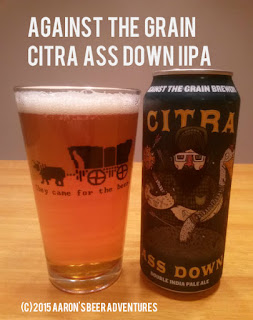 What's on the Can: "Citra ass down and crush this beer! This beer is not candy or mother's milk. It is not brewed by gypsies or aliens, nor does it contain any zombie dirt. This is a Double IPA brewed with Citra hops. It is sticky, hoppy and delicious. Simply drink it and enjoy it. Don't hoard this beer. Citra Ass Down and drink it now." 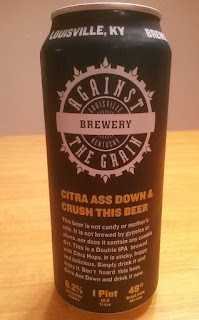 What's on the Website: "This is a very hop forward American style IPA. Brewed with Pale, Vienne, Munich and wheat malt for a solid base for all American hops, focusing mainly on the variety 'Citra.' Citra hops are a relatively new variety introduced in 2008. It was bred as a hybrid of a number of different hops, including Hallertauer Mittelfrüh, U.S. Tettnanger, East Kent Golding, Bavarian, Brewers Gold, and other unknown hops. The resulting hop, Citra, has a distinct citrusy and tropical fruit flavor and aroma. In Citra ass down we used American Columbus for bittering and 11# of Citra at the end of the boil for late kettle addition flavor and aroma. Then we added 6 more pounds Citra and 5# Centennial post fermention (sic) for aroma. Rebrewed for your tasting pleasure!" Read more here!


REVIEW:
Appearance (5%): Poured a clear orange-golden into a pint glass. Just a tad of off-white head that reduces down. Leaves nice lacing on the glass. Yeah, the brewery wants me to drink from the can, but I am a rebel. 4.25/5

Taste (40%): Initially a sweeter passion fruit citrus combining with malt. Detecting a grapefruit-like bitterness with dankness. Still vibrant and refreshing without much alcohol taste, if any. Citra hops really make this a very dangerous 8.2% beer. Wow. 4.75/5

Overall (20%): An outstanding Double IPA. I had seen this at a smaller beer store in Beaverton but passed on it because I had errands to run at the time. I then stumbled upon this gem again at Belmont Station when I did my usual scan of new beers to blog about. It can be on the pricier side for a single tallboy can, but IPA lovers who seek something stronger and maltier should definitely try this. Oh, and the can says the optimal temperature is 48 degrees Fahrenheit and to drink from the can. Oops. But hey, still amazing. 4.5/5

Email ThisBlogThis!Share to TwitterShare to FacebookShare to Pinterest
Labels: Against the Grain Brewery, Imperial IPA, Kentucky