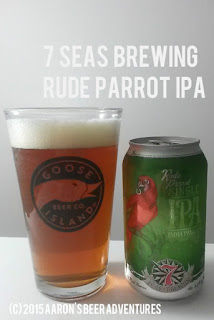 Where distributed: 7 Seas Brewing appears to stay local to the State of Washington. Unknown as to whether they ship or distribute outside of the state yet. Drop them a line for more information!

What's on the Can/Website: "Loud, sassy, and relentless, the Rude Parrot has an insatiable appetite for hops! Brewed with Vienna, light Crystal, and a touch of Honey malt, this golden hued IPA is aggressively hopped with Simcoe and Citra hops. A big, juicy, tropical fruit citrusy hop aroma yields way to an off dry, pleasantly bitter finish." Read more here!

Mouthfeel (10%): Medium body with slight carbonation on the tongue. The citrus-bitterness attacks the palate as you keep drinking it. 4.25/5

Overall (20%): An excellent IPA. Score another one for the local microbreweries. Basically bought this one on a whim just to try it and wound up with another awesome local IPA option. They also have a Double IPA that I may try in the future. In 2015, this brewery was voted Best Brewery in the South Sound (by South Sound Magazine) for the sixth year in a row. The brewery opts for cans (instead of bottles) to keep oxygen and sunlight out. Gig Harbor has a gem with 7 Seas Brewing. 4.5/5