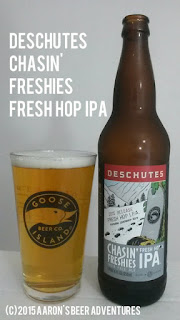 When brewed? Limited-time/seasonal beer. Comes out in October. This is at least the third year of this series. The 2013 version used Amarillo hops, and the 2014 version had Mosaic hops.

Where distributed: Deschutes is making its way into the majority of U.S. states! Click here for their beer finder!

What's on the Website: "Available October until it's gone. Like fresh powder, it's a seize-the-moment thing. This year we've chased down Lemondrop hops from the Yakima valley in Washington. At harvest, we rush the hops from the vine to our kettles to ensure we capture the purest, juiciest essence of the hop flower in every beer. Enjoy the bright, bold aroma and flavor that comes but once a year." Read more here!


REVIEW:
Appearance (5%): Poured a clear golden color into a pint glass. A few millimeters of white head. Good lacing on the glass. 4/5

Overall (20%): An average IPA. Much like a couple of other IPAs I have tried from Deschutes, the ones I have picked are almost too light and pilsner-like for my tastes. To be fair, it drinks extremely easy and dangerous for 7.4%. Still, I have a feeling the previous two years of Chasin' Freshies (especially last year) were much better. 3.5/5