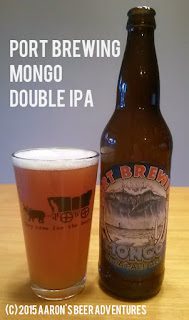 **** = Port Brewing also ships to Washington state, but I did not realize this until after purchasing it online.

Where distributed: Port Brewing just ships their beers to nine states as of November 2015. Click here for where this beer is found!

What's on the Bottle: "We realize it's absurd to show a cat surfing on a beer label, but had you met Columbus, our gray brewing kitten, you too would have concluded that 'Mongo would go...' you see. Even though he only spent 8 months wandering around our brewery, Columbus earned (and eventually owned) the nickname 'Mongo.' The largest of five kittens, he was summarily bounced from the litter on the second day. Legend has it he was ostracized for being larger than life. It mattered not to him. He quickly spent all nine lives and left behind an enduring legacy. Had he not passed so suddenly, we're sure he would have paddled out on the heaviest days and marveled us with his nimble footwork at our local breaks. To commemorate his fleeting existence we created Mongo, an IPA with a resinous, bolder and more robust hop character than a traditional West Coast IPA. Go ahead, give it a chance and maybe you too can learn to live a life more Mongo." 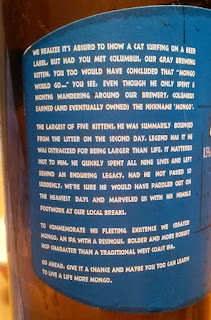 What's on the Website: "A tribute beer brewed to honor the memory of our fallen soldier Columbus (nicknamed Mongo) who used each of his 9 lives in his short (but brazen) ten months on this planet. Mongo begins with a massive resinous aroma created by the judicious use of Columbus, Amarillo and Cascade hops. The initial taste reveals notes of Orange, Mango and citrus fruits with a piney bitterness and hoppy spice with some mild malt flavors on the finish." Read more here!

Overall (20%): A great IPA. Another beer I picked up for its high ratings on BeerAdvocate and RateBeer, and this did not disappoint. A nice deal at about $6 for a Double IPA. I personally like the label (heavy surfer's influence and an awesome tribute to a loved pet/family member). Totally worth buying, especially if you're in the unfiltered Double IPA mood. 4.25/5