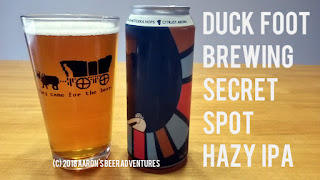 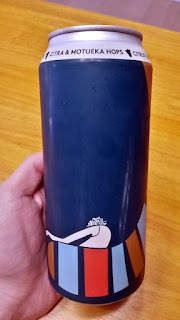 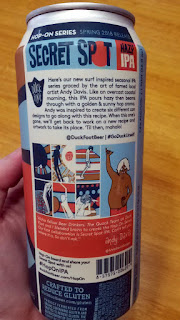 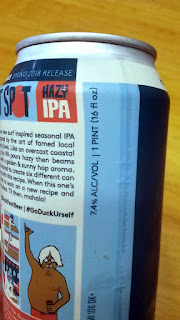 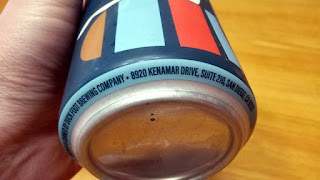 What's on the Can: "Here's our new surf inspired seasonal IPA series graced by the art of famed local artist Andy Davis. Like an overcast coastal morning, this IPA pours hazy then beams through with a golden & sunny hop aroma. Andy was inspired to create six different can designs to go with this recipe. When this one's gone, we'll get back to work on a new recipe and artwork to take its place. 'Til then, mahalo!

Aloha fellow Beer Drinkers. The Quack Team at Duck Foot and I blended brains to create the Hop On Series. Our first collaboration is Secret Spot IPA. Can't tell you where it is. So don't ask."

What's on the Website: "This hazy brew is a blend of New Zealand’s Motueka hop and America’s Citra. Like an overcast coastal morning, this IPA pours hazy then beams through with a golden and sunny hop aroma. Notes of melon, passion fruit and lychee mingle with an overall citrusy character." Read more here!


REVIEW:
Appearance (5%): Poured hazy peach golden into a pint glass. Sediment was at the bottom of the can, so initially looks clear until last pour. Off-white head, trace lacing. 4.25/5

Taste (40%): Almost citrus smoothie-like to start, with slight malt backbone coming in afterward. Aftertaste then brings a wave of passion fruit, melon, and tangerine. Controlled bitterness, mainly from the citrus. 4.25/5

Overall (20%): An excellent IPA. This one has the haze and tropical of the East Coast, but perhaps has a bit more dry tongue (and not as overly juicy) as those East Coast hazies. Nice flavor here, really digging the melon and the citrus. 4.25/5