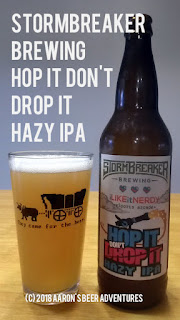 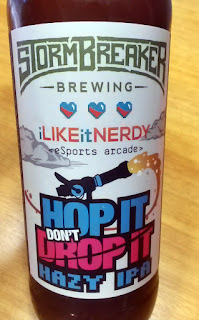 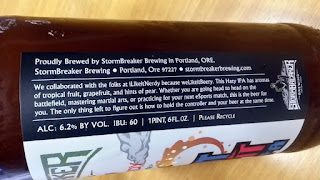 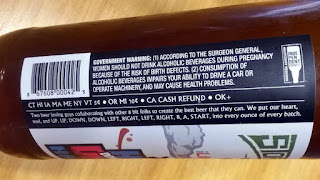 What's on the Bottle: "We collaborated with the folks at iLikeitNerdy because weLikeitBeery. This Hazy IPA has aromas of tropical fruit, grapefruit, and hints of pear. Whether you are going head to head on the battlefield, mastering martial arts, or practicing for your next eSports match, this is the beer for you. The only thing left to figure out is how to hold the controller and your beer at the same time."

Where distributed: Stormbreaker Brewing distributes in Oregon and could otherwise be found in the Pacific Northwest.

Taste (40%): Follows the nose, excellent tropical from start to finish. More oaty malts about halfway in, then finishes with a final wave of tropical. Lots of flavor for 6.2%. 4.75/5

Overall (20%): A world-class IPA. This is basically what the Nobody Puts Hazy in a Corner IPA would have received (more or less) if that beer had nearly as much flavor as this one. Another fine hazy brew from Stormbreaker here. 4.75/5