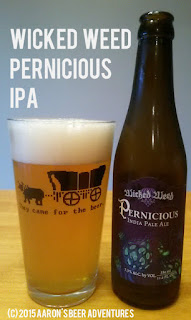 Bottled On Date: Unknown (Wicked Weed usually stamps their bottles, but this did not have a date)
Date Purchased: September 8, 2015 (did not receive until October 10 due to shipping snafu)
Date Opened/Drank: October 14, 2015
When brewed? Year-round beer. One of their flagship beers.

Where distributed: Check here to see if Wicked Weed ships to your area!

What's on the Bottle: "Pernicious implies influence that is harmful in a way not easily noticed. This beer is harmful, not because of overwhelming hop bitterness, but because its balanced brightness insidiously ruins your expectations for all other IPA's. This hop delivery vehicle is crafted to enjoy fresh and often, and because of its drinkability and clean finish, you'll never look at other IPA's the same again. The harm is done."


What's on the Website: "Pernicious is our flagship India Pale Ale boasting a silver medal at this year's (2015) Great American Beer Festival. This massively dry-hopped ale has minimum malt complexity and a combination of juicy, tropical fruit-forward hops with heavy resinous American hops. Pernicious is the epitome of a West Coast IPA, made right here in the Southeast."

Appearance (5%): Poured a clear golden color into a pint glass. Several millimeters of frothy white head that remains for several minutes. Probably the best pour I've had in a long time. Little lacing remained on the glass. 4.75/5

Overall (20%): A world-class IPA. Totally agree with the high marks given by BeerAdvocate and RateBeer. I only wish I knew what the bottled on date was to get an idea of how fresh this is, but after receiving my other Wicked Weed beers (which I will review soon), I'm guessing this was bottled a couple months ago (August 2015). Since opening a few years ago, Wicked Weed has quickly become one of the best North Carolina breweries. Finally, bonus points for the kickass logo. Already looking forward to trying the others. 4.75/5