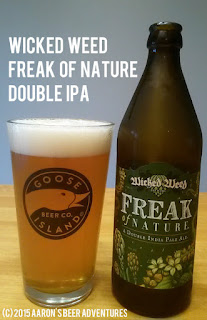 Where distributed: Check here to see if Wicked Weed ships to your area! 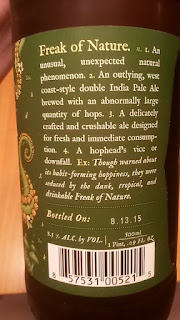 What's on the Bottle: "Freak of Nature. n. 1. An unusual, unexpected phenomenon. 2. An outlying, west coast-style double India Pale Ale brewed with an abnormally large quantity of hops. 3. A delicately crafted and crushable ale designed for fresh and immediate consumption. 4. A hophead's vice or downfall. Ex: Though warned about its habit-forming hoppiness, they were seduced by the dank, tropical, and drinkable Freak of Nature."

What's on the Website: "Freak of Nature Double IPA is our hoppiest ale. The focus of this beer was to create a hop delivery vehicle. We dry hop this beer at a rate of almost four pounds of hops per barrel. The resulting blend of dank and citrus forward hops make for a palate changing experience. Hopheads, rejoice. This is your beer."

Appearance (5%): Poured a clear golden-orange color.. About 3 mm of frothy white head, reducing to a sudsy surface. Wonderful lacing left on the glass. 4.5/5

Taste (40%): Initially detecting a combination of pine, malt, dank, and tropical-citrus (grapefruit) flavors. Intense, yet controlled citrus-bitterness that stays on the tongue. A total hop-bomb at 100 IBUs. Slight traces of alcohol. Delicious and satisfying. 4.5/5

Overall (20%): An excellent double IPA. I was 3 for 3 in picking some damn good Wicked Weed beers from the East Coast. It was $5.75 for this bottle and well worth the money spent. Again, a beer with multiple rave reviews on BeerAdvocate and RateBeer. If you desire a stronger, maltier, and dank IPA that retains a nice tropical feel, this is for you. 4.5/5