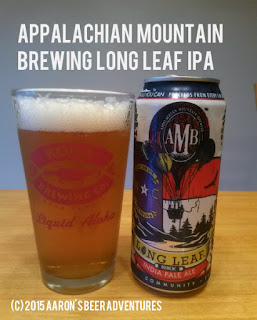 Date Purchased: September 8, 2015 (did not receive until October 10 due to shipping snafu)
Date Opened/Drank: October 12, 2015
When brewed? Year-round beer. One of their flagship beers.
IBUs: 74

Where distributed: AMB likely ships only within North Carolina, but Bruisin' Ales, a North Carolina liquor store, ships to other states. 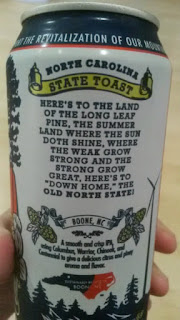 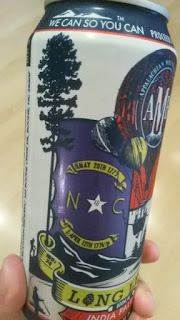 What's on the Can: "Here's to the land of the long leaf pine, the summer land where the sun doth shine, where the weak grow strong and the strong grow great, here's to 'down home,' the Old North State! A smooth and crisp IPA using Columbus, Warrior, Chinook, and Centennial to give it a delicious citrus and piney aroma and flavor."

What's on the Website: "Taking its name from the toast of the Old North State, this amber IPA cheers with a white head, citrus aroma, and an intense, resins hop flavor that will linger on your palate."

Appearance (5%): Poured a hazy golden/amber color into a pint glass. A few millimeters of frothy white head reduce to a light sudsy surface. Very little lacing on the glass. 4.25/5

Overall (20%): A solid IPA. I personally prefer that clean passion fruit or grapefruit-hop taste over a piney beer, but this is still very respectable in all aspects. I would definitely drink this again. Bonus points to AMB for their commitment to supporting local businesses and working with nonprofit organizations. They remind me of Ex Novo Brewing, an actual nonprofit brewery in Portland. 4.25/5