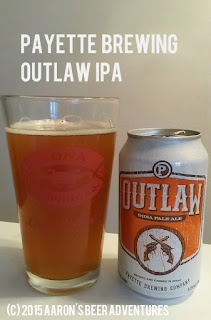 Where distributed: Payette Brewing only distributes to Washington and Idaho as of August 2015. I am unsure if you can get it in Oregon other than on draft. 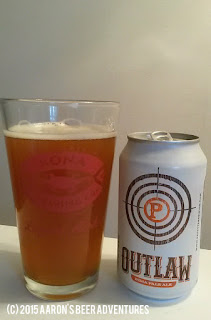 What's on the Website: "Just like a true outlaw, our American IPA is full of character and unpredictability. It's brewed with lots of American hops backed up by a solid malt base. It starts with hints of pine, citrus, apricot and a slightly spicy aroma. The malt base makes for a hint of sweet and the finish has a mild hop bitterness." Click for profile on Outlaw IPA!


REVIEW:
Appearance (5%): Pours a cloudy orange-amber into a pint glass. Sediment noticeably suspends in this beer. No lacing on my glass. Sudsy surface, but not much. 4/5

Taste (40%): Malty upfront with grapefruit-citrus and piney notes. Finishes smooth. The alcohol may be noticeable halfway through the glass. 3.75/5

Mouthfeel (10%): Medium-body. A bit heavier than most American IPAs that I've had to date, especially on Single IPAs. Coats the tongue well. 3.75/5

Overall (20%): A good IPA. It's not as refreshing and citrus-forward as the style of IPA I prefer, but it's one that I would accept if handed to me at a party. It's fairly cheap for a six-pack, but it's their Blood Orange IPA -- which I have had on tap twice to date -- that I prefer over this. 3.75/5