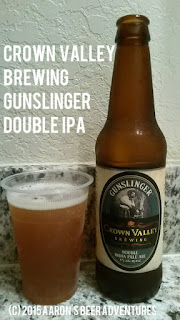 What's on the Bottle: "Gunslinger Double IPA is a robust and malty beer, with an intense hop profile. Well balanced, rich malt flavors with powerful hop notes from the use of five different hop varieties." Learn more about Gunslinger IPA here! 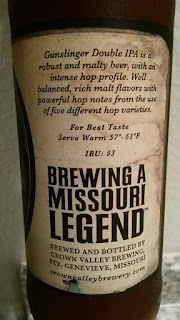 Where distributed: Crown Valley Brewing ships within Missouri. I am unsure at this time if they ship anywhere other than Missouri.

Overall (20%): A decent Double IPA. Probably a bit too malty for my liking to drink regularly, but I also could not pass up this beer being a $1.00 (discounted) option at the local liquor store. Another brewery I had to try in KC because Crown Valley Brewing does not ship to the Pacific NW. 3.75/5