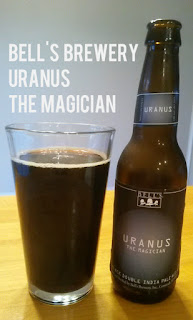 What's on the Bottle: "This is one of a seven part series inspired by Gustav Holst's musical composition 'The Planets.'" Strap in an embark on a flavor tour of our solar system -- in the order of Holst's piece, Mars to Neptune." (was the sixth of seven beers released) 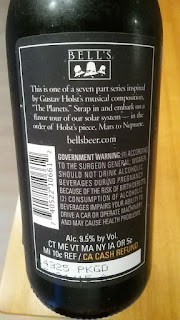 Where distributed: Bell's Brewery ships to approximately 21 states and the District of Columbia. On the West Coast, it can only be found in Southern California and Arizona. See if Bell's ships to your area!


REVIEW:
Appearance (5%): Poured black into a pint glass. Some white head and lacing on the glass. Sudsy surface. 4.5/5

Smell (25%): Malty and hoppy, much like what that stronger IPA would bring. Still, it has a mellow, inviting feel. 4/5

Taste (40%): Malty and hoppy. I got a roasted chocolaty, smoky experience in there as well, adding to the magnificent complexity. Alcohol presence noted, but not surprising for a beer checking in at 9.5%. 4.25/5

Overall (20%): Awesome Black Double IPA. It's worth noting that this was my first Black IPA and first Black Double IPA. Bell's once again gets a big thumbs up and makes me wonder why we cannot get this beer in the Pacific NW on a regular basis. As noted above, I had to order this from Southern California. Although the Two Hearted Ale is likely the king of Bell's beers in my book, I was pleasantly surprised with the quality here. I may have to plan a Michigan trip for 2016. 4.5/5