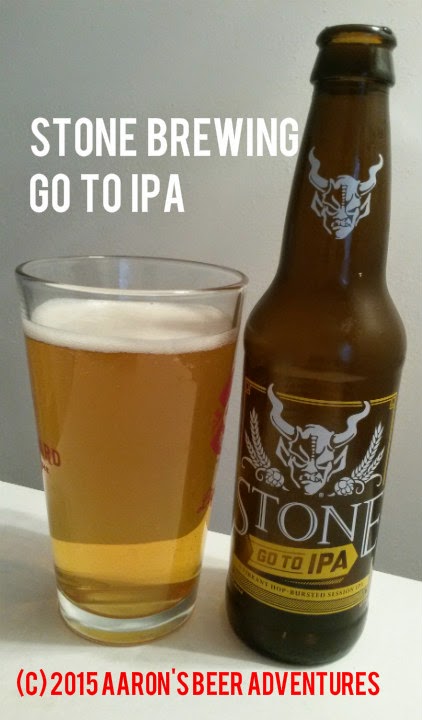 Date Purchased: April 11, 2015
Date Opened/Drank: April 21, 2015
"Best By" Date: Stone Brewing suggests to drink this beer no later than 90 days from bottling date.
IBUs: 65
When brewed? Year round beer. First released in March 2014.
Where distributed: Stone Brewing ships this beer to 41 states. Surprised it's not shipped to Hawaii.


What's on the Bottle: "Since Day One, we've been abundantly forthright and fully transparent about our lust for hops. It's led us to craft many an IPA, most of them imperial -- some intense for their time and all timeless in their intensity. For Stone Go To IPA, we are embracing our hop obsession in a new way, funneling an abundance of lupulin-borne bitterness into a 'session' IPA delivering all the fruity, piney character of a much bigger IPA. To accomplish this, we employed 'hop-bursting,' a new technique wherein an irrational amount of hops is added during the final phase of the brewing process to coax out extreme flavors and aromas while also imparting a burst of desirably pleasant bitterness. The result is an Alpha-acid-rich beer that fans can enjoy more of without missing out on the assertive hop character you, like us, crave. So, sit back and go two with your everyday go-to IPA and bask along with us the glory of the almighty hop."

REVIEW:
Appearance (5%): Poured clear light golden into a pint glass. Some carbonation and a thin layer of white head. Stays sudsy on the surface. 4.5/5

Smell (25%): Predominantly grapefruit with additional lighter citrus notes following. As a grapefruit lover, I am loving this one. 4.75/5

Taste (40%): Bitter grapefruit right from the start, lingering on the tongue throughout. Incredibly refreshing and fits the session IPA profile perfectly. Very hop-forward. Not fond of the lasting bitterness, but otherwise a good choice. 3.75/5

Mouthfeel (10%): Light body and refreshing. Easy to drink. Leaves a dry feeling on the tongue. Likely right around average with its highs and lows. 3.5/5

Overall (20%): A good session IPA. The Go To IPA really drew me in with the amazing grapefruit aroma. It is a beer meant for the warmer months (but can be enjoyed all the time). Stone successfully nailed the session IPA, but personally, I am simply not a session guy -- I still gravitate toward the IPAs and double IPAs that are around 7 to 8.5%. That's likely why I preferred the Delicious IPA; it had more oomph to it in flavor and still drank easy with a higher listed alcohol content. If you prefer the lighter IPAs, the Go To IPA is up your alley. For me, it's still on the above-average side of the scale, but actually not my go-to beer in the company. 3.75/5