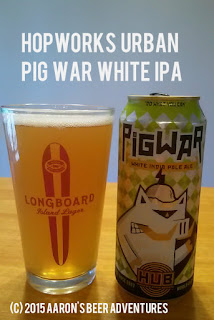 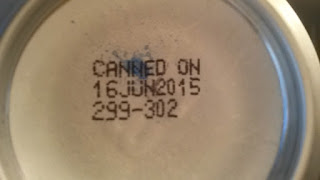 Where distributed: Hopworks ships to three U.S. states (Washington, Oregon, and Idaho) and British Columbia. Some of Hopworks' beer also makes it to the Canadian province of Alberta. Click here!


REVIEW:
Appearance (5%): Poured hazy white-gold into a clear pint glass. Reminded me of carbonated pineapple juice on appearance. Some lacing. About 3-4 millimeters of white head that reduced to a sudsy surface. Intriguing color. 4.25/5

Overall (20%): An outstanding IPA. I kept seeing this in stores and for whatever reason passed on getting it. Then I looked closer at the label, saw it was a White IPA, and immediately snatched a 4-pack from the shelf. The citrus grapefruit flavor alone sold me; it brought such a refreshing experience that made me want to drink more. I was surprised at the mid-80s rating (on average) that other people were giving it on BeerAdvocate. For me, this is a stellar local option -- even at $2.50 per can. 4.5/5