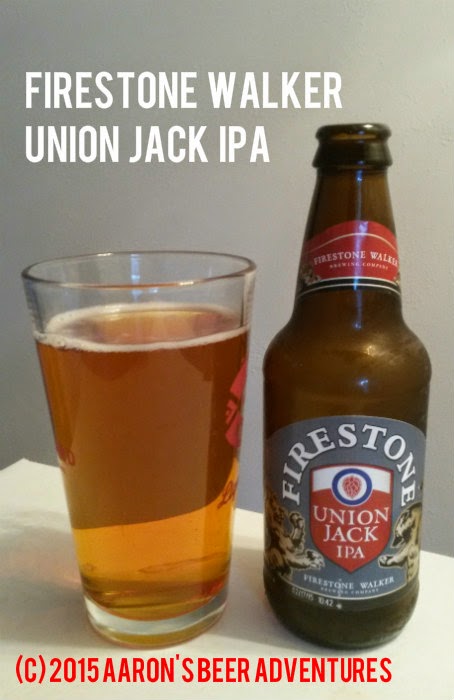 What's on the Website: "An aggressively hopped West Coast-style IPA. Union Jack showcases exceptional dry hop character with stunning pineapple, citrus and piney aromas on the nose accompanied by honey-like malt aromatics. Double dry hopping brings bold grapefruit, tangerine and citrus flavors that are contrasted by pale malt sweetness to balance this intense brew. A true tribute to the style that put the West Coast on the craft beer map."


REVIEW:
Appearance (5%): Poured orange-light amber into a pint glass. Significant carbonation; white head dissipated to a slightly sudsy surface after a short time. Some lacing stays on the glass. 4.5/5

Taste (40%): Sweet-malty and piney upfront, with a controlled citrus-bitterness on the back end. The aftertaste reminds me of grapefruit. Clean and delicious. Drinks far easier than the 7.5% stated on the bottle. 4.75/5

Mouthfeel (10%): Medium to medium-light malty body, very easy to drink. Some carbonation on the tongue. 4.5/5

Overall (20%): An outstanding IPA. In an April 2015 article, where a panel blind-taste-tested 116 IPAs, Firestone Union Jack IPA placed ninth. The amazing balance of the malts, pine, and citrus, combined with how easy it drank for 7.5%, simply stunned me. This is a beer to be proud of. 5/5