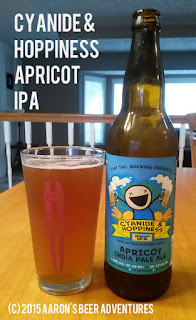 Where distributed: Flat Tail Brewing ships to select states, including California, Oregon, and Washington. See if Flat Tail ships to your area! 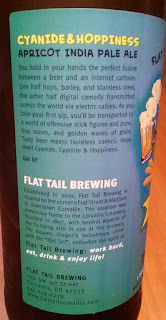 What's on the Bottle: "You hold in your hands the perfect fusion between a beer and an internet cartoon. One half hops, barley, and stainless steel, the other half digital comedy transmitted across the world via electric cables. As you take your first sip, you'll be transported to a world of offensive stick figures and puns, hop cones, and golden waves of grain. Tasty beer meets tasteless comics. Hops meet Cyanide. Cyanide & Hoppiness. Get it?"


REVIEW:
Appearance (5%): Initially pours clear golden-orange into a pint glass. However, sediment is at the bottom, and my second helping reflected that: a cloudy, yellow-orange appearance. Sudsy surface, temporary white head. 4/5

Smell (25%): Sweet and malty. Apricot was not the first fruit coming to mind; I was thinking pineapple. Hoppiness is definitely there. Refreshing. 4/5

Taste (40%): Mostly malty and hoppy at the start, with controlled citrus-bitterness. My second glassI prefer the more unfiltered helping I had, which I found less alcoholic and more fruity. Alcohol makes its presence felt after a few sips. Again, was thinking more pineapple experience instead of apricot. If there's any apricot in there, it might be on the aftertaste. Took the average of my initial (3.75) and second (4.25) glasses. 4/5

Mouthfeel (10%): Medium-bodied, malty, and carbonated. Bitterness lingers on the tongue for a few seconds. Feels heavier than most IPAs I've drank. 3.75/5

Overall (20%): An good IPA. Since I love the Cyanide & Happiness cartoons, I really looked forward to trying this one. I initially wanted to film a video review of this in California (was able to find this particular beer there), but unfortunately ran out of time. The initial glass (which I would have rated a 3.5 overall) felt a bit too heavy and malty for me to drink on a regular basis. However, the second, more unfiltered glass (overall rating 4.5) was very enjoyable. Simply taking the average of those two. 4/5