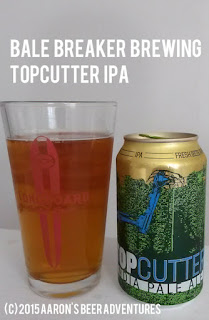 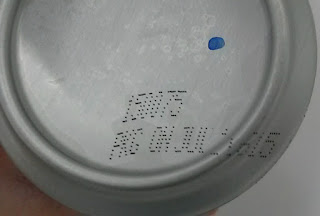 Where distributed: I have only seen Bale Breaker Brewing in the state of Washington, but they may ship to other states -- whether on draft or in cans. Check to see if Bale Breaker ships to your area! 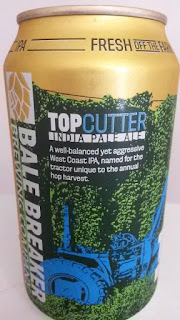 What's on the Website: "Our flagship IPA is a well-balanced yet aggressive West Coast IPA that showcases Yakima Valley hops at their finest. Late additions of Simcoe, Citra, Ahtanum, and Mosaic give this beer its complex citrus, fruity, and floral aroma and flavor. Named for a unique piece of farm equipment that removes hop vines from the trellis during the annual hop harvest, Topcutter IPA delivers loads of hoppiness all year long."

What's on the Can: "A well-balanced yet aggressive West Coast IPA, named for the tractor unique to the annual hop harvest."

Taste (40%): Starts very malty and floral. Alcohol flavors are present from the second or third sip. Drinks more like a solid Double IPA. It is a flavorful beer that is very complex. The hop-bitterness lingers on the aftertaste for a good while. Feels like a one-and-done beer for me. 3.5/5

Mouthfeel (10%): Medium body. Velvety and carbonated on the tongue. Left my tongue dry. A lot of hop-bitterness lingers. 3.75/5

Overall (20%): A decent IPA. I have to admit, I did not care for it on the first few sips, believing it was too malty and alcoholic for the ABV listed. As I kept drinking, the experience mellowed out and I was able to enjoy it a bit more. I don't have an explanation for that, other than perhaps I had reached a happy place of some sort. With significant bitterness lingering, it felt like the IBU could be much higher. This is one complex puppy, and it's a passable option to have on standby. 3.5/5