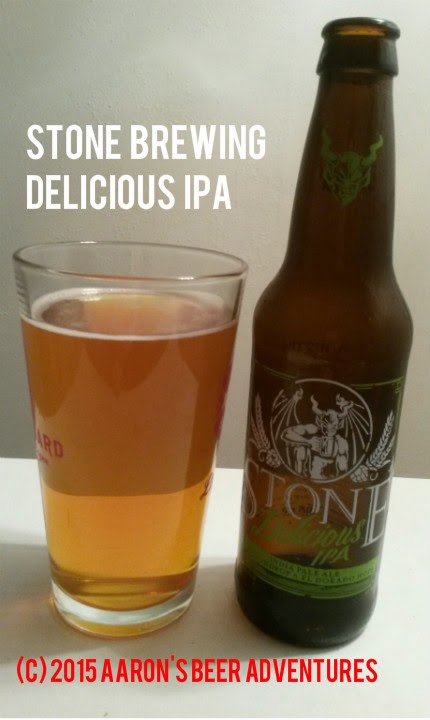 
What's on the Bottle: "From the beginning, Stone has been obsessed with the mission of providing people access to high-quality craft beer. After all, great beer is for everyone and anyone with the good taste to recognize it, not just a niche group like us uber beer geeks. So, when we developed this pleasantly bitter, deliciously citrusy hop-driven IPA, we took it as an opportunity to go a step further and do something we've spent over a year researching and perfecting: creating a beer that makes it possible for nearly everyone to experience our aggressive, no-holds-barred approach to craft brewing. It's a flavorful, cutting-edge modern-day IPA for everyone. Lemondrop and El Dorado hops provide plenty of fruit citrus character and a burst of hop zing that sings on the palate. We're proud to present it to those who already know us for our IPA prowess and to those who, so far, have only heard legends."

What's on the Website: "While our beers are many and diverse, yet unified by overarching boldness, India pale ales are our undeniable bread and butter. We've brewed many over the past 18 years, from double-down bitter bombs to piney session sippers. Whether it's big IBUs or a precise ABV, there's usually a target we're shooting for. The same is true of this, our latest IPA, but we gave zero thought to any acronyms. This one was all about packing as much unique and, you guessed it, delicious flavor into a glass as humanly possible, regardless of oomph or octane. This intensely citrusy, beautifully bitter beer is worthy of the simple-yet-lordly title of Stone Delicious IPA. Lemondrop and El Dorado hops combine to bring on a magnificent lemon candy-like flavor that's balanced by hop spice. It's unlike anything we've tasted in nearly two decades of IPA experimentation, and another lupulin-laced creation we're excited to introduce to hopheads everywhere."

Taste (40%): Lemon-citrusy and slightly bitter from initial taste through the aftertaste. Incredibly refreshing and would be perfect as a spring or summer beer. Very little alcohol detected (and none until I nearly finished the bottle), which is simply dangerous when clocking in at 7.7%. Would drink all day and at least two on Sunday. 4.75/5

Mouthfeel (10%): As noted above, this is incredibly refreshing and extremely easy to drink. Only a tad bit of alcohol on the tongue. Still at medium body, with a malty presence. Again, excellent overall. 4.75/5

Overall (20%): Stone has struck again with another world-class beer. They had already intrigued me with the Lemondrop and El Dorado hops, but all I needed was one whiff of the beer to be sold. I further found it interesting that Stone used barley for this beer, yet brewed it in a way to reduce the gluten -- and the product probably still contained a good amount of that gluten. I hope this finds its way onto the "Year-Round" category of beers, because this is definitely one I'd seek out or recommend to other IPA lovers. This is a spring/summer beer that I could down several of and not regret anything. 5/5