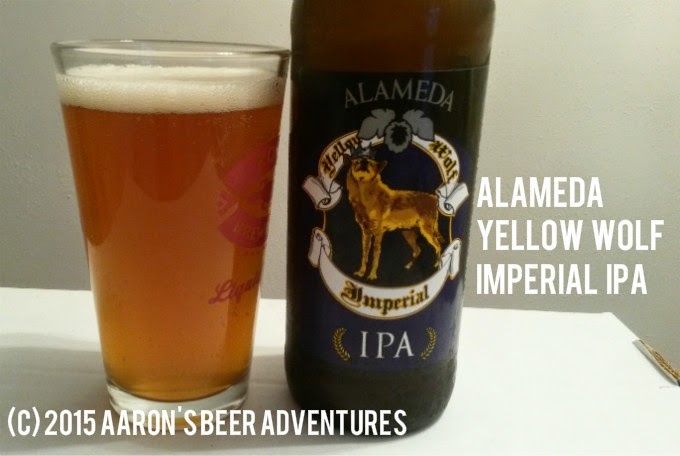 What's on the Website: "With over 100 IBUs Yellow Wolf has enough eye-popping intensity to satisfy even the most ardent hopheads. It has bright piney nose and light golden color. We suggest pairing it with sunshine." Go here for website!

Taste (40%): Intense piney-hoppy bitterness, yet wonderfully controlled. Some alcohol detected on the aftertaste, especially when getting to the halfway mark of the pint glass. Pretty nice for 8.2%. 4/5

Mouthfeel (10%): Fairly medium-body, perhaps just slightly below that. More refreshing than other Imperial IPAs I have had. Did not get much carbonation on the tongue after seeing lots of bubbles on the pour. Coats the tongue slightly, and there is not much bitterness left on the aftertaste. Well done. 4.5/5

Overall (20%): A solid beer from Alameda Brewing. This beer lives up to the 103 IBUs as stated on the website. It might be a bit too bitter for me to enjoy all the time, but I can see myself opening another bottle of this. Definitely worth the price of admission at $4.79. 4/5