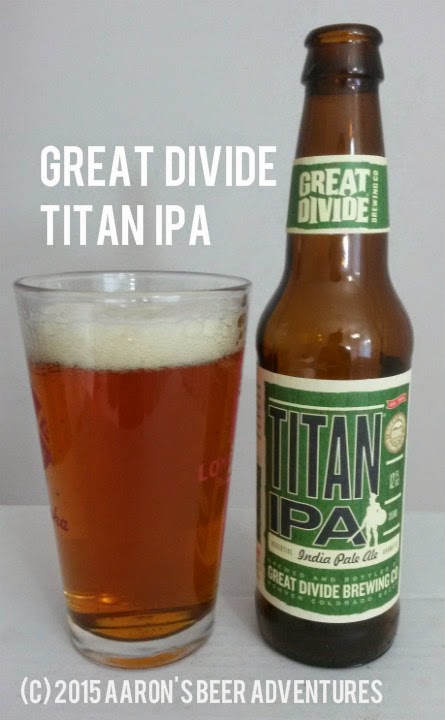 What's on the Bottle: "Titan IPA is a big, aggressively hopped India Pale Ale brewed for hop disciples. It starts out with piney hop aromas and citrus hop flavors, and finishes with a nice rich, malty sweetness that is balanced with crisp hop bitterness."

Where distributed: Great Divide Brewing ships to about 15-20 states. Go here for their distributor list.


REVIEW:
Appearance (5%): Poured a clear dark orange-copper into a pint glass. Good carbonation and 2-3 centimeters of head at the outset that mostly disappeared within 30 seconds. Some lacing left on the glass. Incredible appearance. 5/5

Taste (40%): A nice balanced blend of malt, bitterness, and hops. Some alcohol flavor detected that does detract from the experience slightly, but it finishes wonderfully. Still one of the best single IPAs I have had. 4.75/5

Mouthfeel (10%): Medium body, slight tongue coating. A citrus-pine bitterness lingers on the tongue, but it is a controlled bitterness that does not overwhelm or detract from the drinking experience. Some carbonation on the tongue. 4.5/5

Overall (20%): Outstanding IPA. I bought this because I noticed that The Bros on BeerAdvocate had given it a perfect 100 and RateBeer gave it a 98. I knew Great Divide made some great beers, but even I was pleasantly surprised at the quality of the Titan IPA. It may have a slight alcohol flavor to remind me that it is 7.1%, but the balanced flavors and finish make this a must-try for IPA lovers. 4.75/5