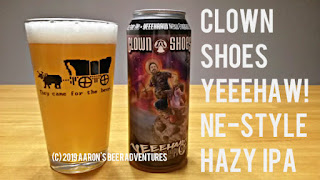 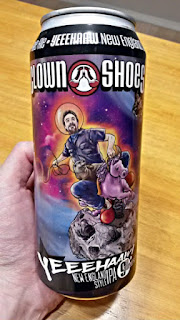 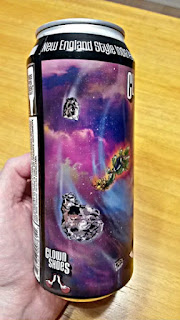 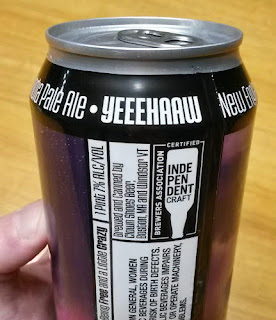 Commercial Description: "Our take on 2018's most notable craze - this version of a New England IPA is brewed with flaked oats and wheat, and double dry hopped with Galaxy, Columbus, Citra, and Mosaic hops."

Where distributed: Clown Shoes currently distributes to many states, mostly in the Midwest and East Coast. Some Clown Shoes beers may also be found in the Pacific NW and Hawaii.


REVIEW:
Appearance (5%): Pours hazy golden into a pint glass. Unfiltered; sediment suspended in the beer that came from the bottom of the can. Frothy white head, good lacing. 4.5/5

Taste (40%): Mostly tropical grapefruit from start to finish. Has some bitterness but somewhat held in check. Complementing malt backbone that doesn't overpower. Aftertaste has grapefruit-like qualities, but also lingering bitterness. 4/5

Overall (20%): An awesome Double IPA. Perhaps a tad more bitter than what I usually expect from a NE-style IPA. At times, I'll get good juicy notes, while others it's a healthy dose of bitterness. Regardless, this is one I will happily drink. 4/5