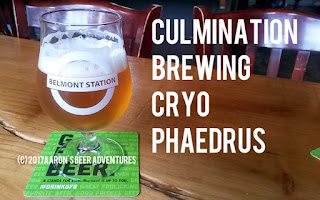 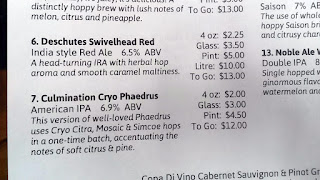 More About This Beer: Phaedrus is Culmination Brewing's flagship IPA, full of tropical aromas and flavors. Cryo Phaedrus uses the same hops (Citra, Mosaic, and Simcoe), but the hops have been frozen in liquid nitrogen to preserve a more intense, concentrated hop experience.

Where distributed: Culmination Brewing can be found in the Pacific Northwest. It slowly but surely has expanded throughout the Portland area.

Taste (40%): Much like its flagship counterpart, it's a mostly tropical citrus experience. Mainly a balanced attack of citrus and pine through the aftertaste. Such a drinkable IPA. 4.5/5

Mouthfeel (10%): Medium-bodied, good carbonation. Virtually no dry tongue for me. Pleasing and juicy. 4.5/5

Overall (20%): An outstanding IPA. I have long been a fan of Phaedrus and was eager to try the Cryo version when it first came out. A busy schedule thwarted that, and by the time I got to Culmination, their keg had already kicked. Luckily, Belmont Station still had its keg on tap. On the aroma, I felt the tropical was more intense than regular Phaedrus. On flavor, I'd probably want them side by side to truly compare. Still, Cryo Phaedrus was very delicious. I'm curious as to whether cryo hops will be seen in more beers as time goes on (probably). 4.5/5