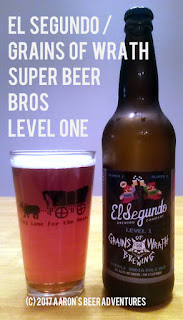 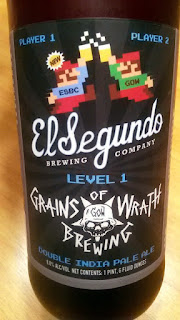 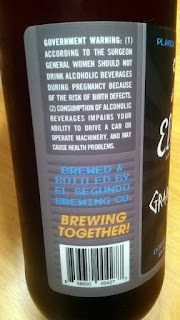 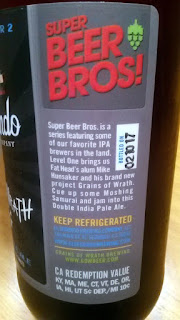 What's on the Bottle: "Super Beer Bros. is a series featuring some of our favorite IPA brewers in the land. Level One brings us Fat Head's alum Mike Hunsaker and his brand new project Grains of Wrath. Cur up some Moshing Samurai and jam into this Double India Pale Ale." Read more here!

Smell (25%): Very citrus tropical, getting orange, papaya, peach, and maybe some other stone fruit. Some dank. 4.5/5

Taste (40%): Hop-forward with some tropical dank and malt, then the explosion of citrus tropical really comes through. No octane and a pleasant experience. 4.25/5

Mouthfeel (10%): Medium-bodied, good carbonation. Slightly dry on the tongue with some stickiness. 4.25/5

Overall (20%): An excellent IPA. This new collab series by El Segundo is off to a kickass start. Fat Head's is well known in the Portland area and produced some amazing beers when Mike was working there. With Camas not too far from me, I expect to head there at some point to try those beers fresh from the source. The price is a bit on the pricey side but the drinking experience is wonderful. 4.25/5