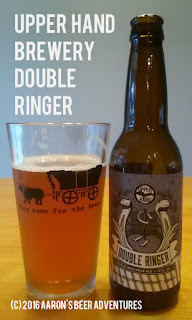 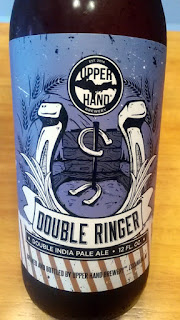 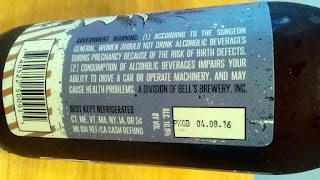 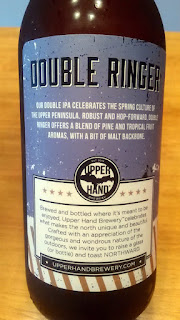 What's on the Bottle/Website: "Our Double IPA celebrates the spring culture of the Upper Peninsula. Robust and hop-forward, Double Ringer offers a blend of pine and tropical fruit aromas, with a bit of malt backbone." Read more here!

Where distributed: As of July 2016, Upper Hand Brewery can only be found in the Upper Peninsula of Michigan and in Northern Wisconsin. In mid-June, Larry Bell graciously brought some of these beers to Portland as part of a special PDX Beer Week event. See if Upper Hand ships to your area!

Smell (25%): Mostly a pleasing tropical pineapple and other citrus notes. 4.25/5

Taste (40%): Hop-forward, mostly tropical pineapple. Very smooth considering it is 10% ABV. A complementing hint of tropical malt on the back end. Flavorful and awesome. 4.25/5

Overall (20%): An awesome Double IPA. It was a no-brainer that I was attending this event at Saraveza, and the consensus in Portland is obvious: Bell's Brewery and Upper Hand Brewery are extremely popular with the locals. I'm glad Larry Bell himself was here to see how passionate we are about our beer, since that should probably lead to additional future shipments. As expected, this beer showcased the balanced nature a great IPA from the Midwest can have. Here's to hoping we get an encore shipment of these very soon. 4.25/5