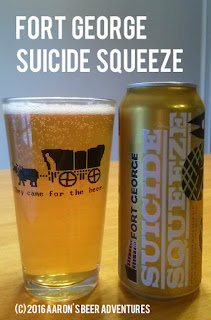 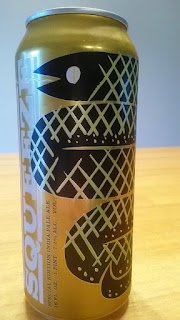 Where distributed: Fort George appears to stay local and ships to Washington, Oregon, and Idaho as of this blog post. I am not sure if they ship elsewhere. Check their Beer Finder!

What's on the Website: "Dank, Lush, Choice. Not the same Session IPA from 2014 - the brewery has remastered the recipe in a big, big way. Artfully cut like a 7" vinyl, *Special Edition pops with Mosaic, Amarillo and Citra hops. Front-loaded with organic 2-row barley and paired with deep cuts of specialty malt, - Suicide Squeeze IPA is a well-rounded experience." Read more here!

Taste (40%): Nice tropical malt and some dankness upfront. Sweet burst of lychee, peach, and pineapple throughout. Refreshing with controlled bitterness. 4.25/5

Mouthfeel (10%): Medium-bodied with good carbonation. Somewhat of a dry finish. 4/5

Overall (20%): A solid IPA. I was honestly more a fan of their Fresh Wet Hop IPA and Vortex IPA. This one tends to bring out more dankness and tastes sweeter than what I'm generally used to for IPAs. Still, I would gladly drink this. A tad on the fence as to whether this was worth $3, but still worth checking out at least once. 4/5