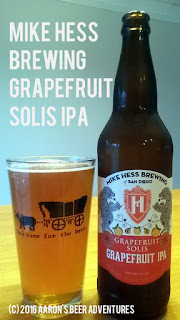 What's on the Bottle: "Grapefruit Solis kicks it up a notch by taking our awesome San Diego style IPA and pumping it full of citrusy grapefruit goodness. No artificial flavors either - we're talking real fruit. The hops are carefully selected to play off the zestiness, and the malt is subtle in the background. The result is dry, crisp and deliciously refreshing." 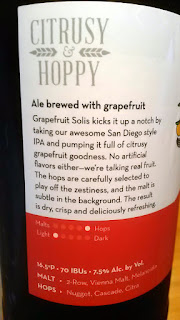 When brewed? Probably a limited-time beer. Not to be confused with their year-round Solis Occasus IPA, which is now sold in cans and has 52 different batches as of March 2016.

Where distributed: Mike Hess Brewing ships to select areas (likely just California), and generally cannot be found in the Pacific Northwest. Check to see whether you can find Mike Hess beers in your area!

Taste (40%): Intense grapefruit from start to finish. It's like I'm drinking a refreshing grapefruit soda without any in-your-face carbonation. There might be the slightest of alcohol octane and malt in there, but it blends in so well with the grapefruit. This is flat out awesome. 4.75/5

Overall (20%): A world-class IPA. This smells and tastes quite similar to Ballast Point's Grapefruit Sculpin, which I also gave a near-perfect score. I only wish I knew how fresh this beer was; I didn't see any stamp from the brewery as to when this beer may have been bottled, although it may be safe to say it was brewed sometime earlier this year. A damn good price at $7.49 a bottle. Heck, I also really loved the label for this beer. Grapefruit Solis is a kickass option and a must-try for grapefruit-forward IPA lovers like myself. 5/5