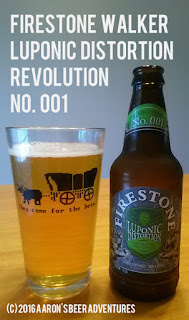 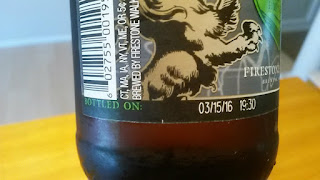 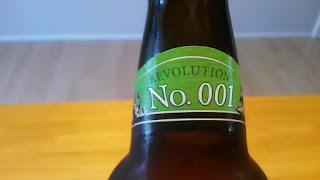 When brewed? Limited-time beer. Part of its Rotating Hop Series, an ever-evolving mix of experimental hops and will be remixed every 90 days. This is Revolution No. 001 (the first mix).

What's on the Website: "Every 90 days, the brewing team is going to mix things up and deliver a new batch of Luponic Distortion. You'll know which Luponic you're drinking by the unique revolution number on the label. It all kicks off with Revolution No. 001. Luponic Distortion is not a single beer, but rather an ongoing series of beers that will evolve and revolve approximately every 90 days. It all kicks off with Revolution No. 001, to be followed by Revolution No. 002 and so on. The base beer will remain the same with each new release, but the hop blend will change every time, so tat no two releases will be exactly alike. In other words, there will be a common thread, but also some turns in the road as different hops are pushed to the forefront." Read more here and here!

Smell (25%): Mostly tropical citrus (grapefruit) with some pine and subtle malt. Loving it. 4.5/5

Taste (40%): Pleasing and clean tropical citrus-fruit flavors. Drinks easy as advertised (just 5.9% ABV and 59 IBUs). This is a definite go-to beer for spring and summer. 4.5/5

Mouthfeel (10%): Medium-light body, some carbonation, some bitterness lingers on the tongue in a good way. 4.5/5

Overall (20%): An outstanding IPA. This is my third Firestone Walker IPA that I have reviewed, and each time, it has always been a damn good buy. This is right on par with its critically acclaimed Union Jack and Double Jack beers - and both already had me spoiled. I'm intrigued by the different versions of Luponic Distortion to follow. Not sure if this will end up being my favorite of the series, but it's safe to say we are off to a great start here. 4.5/5