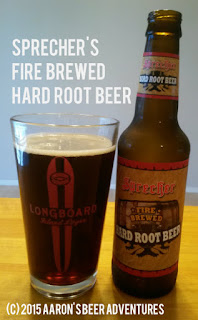 Where distributed: Sprecher's Brewing ships their beers and sodas to several U.S. states. As far as I know, they do not ship the Fire Brewed Hard Root Beer to Washington or Oregon. I had to order mine online.

What's on the Website: "An adult version of our famous root beer with a kick. This alcoholic beverage is inspired by the original fermented mixtures of roots and herbs that have evolved into modern root beer. This truly original American beverage has the flavor of Sprecher Root Beer that has been aged in oak bourbon barrels and is sure to please the bootlegger in you." Click here!


REVIEW:
Appearance (5%): Poured dark brown into a pint glass. Sudsy surface with a very bubbly head of a couple millimeters. 4/5

Smell (25%): Some sweetness, but almost predominantly anise and medicinal in smell. It has a root beer essence, but lacks the "authentic" or nostalgic feel I had with the other hard root beers. 3.5/5

Taste (40%): It has qualities of root beer, but they quickly give way to a more medicinal spice experience. At 5%, the alcohol is still noticeable. It's almost too fake on the flavor front to make me appreciate this. I do like the slight fiery kick this root beer has. 3/5

Mouthfeel (10%): Silky and velvety, medium body, and well carbonated. The spice hits the lips in a pleasing manner. 3.75/5

Overall (20%): An average hard root beer. To be fair, this had the unfortunate task of following two outstanding products: Small Town's Not Your Father's Root Beer and Mission's Hard Root Beer. For both products, the alcoholic content was not nearly as noticeable -- and Mission's version checked in at 7.5%. At the end of the day, I will be enjoying NYFRB and Mission Hard Root Beer over this. At least there's someone else out there who enjoyed this. 3/5