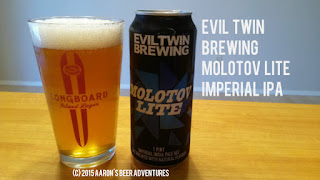 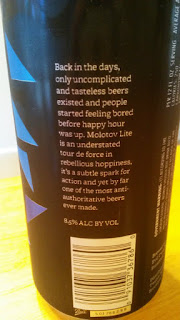 What's on the Can/Website: "Back in the days, only uncomplicated and tasteless beers existed and people started feeling bored before happy hour was up. Molotov Lite is a understated tour de force in rebellious hoppiness, it's a subtle spark for action and yet by far one of the most anti-authoritative beers ever made by Evil Twin Brewing."


REVIEW:
Appearance (5%): Poured a hazy golden-orange with significant carbonation and a few millimeters of white head. The head then reduces to a sudsy surface. Good amount of sediment in the beer. 4.5/5

Taste (40%): Malty-pine to start, with bitter grapefruit and alcohol coming through immediately after. The bitterness lingers on the aftertaste. Full of flavor from start to finish. 4/5

Overall (20%): A great IPA. Solid choice to bring to a party. Probably a beer that I might only be able to drink one or two of -- and I'll be sipping this for sure -- but I can definitely get behind the flavor. At nearly $3 for a single tallboy, I'm likely to get just a couple of these anyway. 4/5