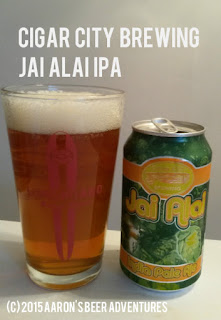 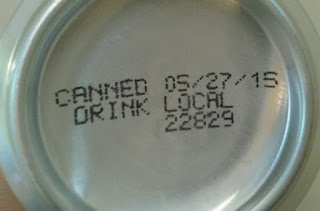 Where distributed: Cigar City Brewing ships to several states. However, they generally do NOT ship to the Pacific NW. Cigar City brought beer to Portland earlier in 2015 as part of the Craft Brewers Conference festivities, but Jai Alai was not one of those beers. Find out if Cigar City ships to your area! 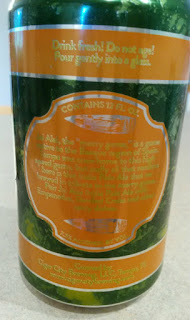 What's on the Can/Website: "Jai Alai, a game native to the Basque region of Spain, is played on a court called a fronton. Jai Alai players attempt to catch a ball using a curved mitt whilst the ball travels at speeds up to 188mph! Proving they have a sense of humor the Spanish dubbed this game, with its ball traveling at racecar speeds, 'the merry game.' Tampa was once home to a bustling Jai Alai fronton but sadly all that remains of Jai Alai in the Tampa Bay area is this India Pale Ale that we brew in tribute to the merry game. The India Pale Ale style of beer has its roots in the ales sent from England to thirsty British troops in India during the 18th century. Pair Jai Alai India Pale Ale with Beef Empanadas, Deviled Crabs and other spicy dishes."

Why Cans? While Cigar City still sells some of their beers in glass bottles, Cigar City prefers aluminum cans. Here is why.


REVIEW:
Appearance (5%): Poured a clear orange-amber. About 4-5 mm of frothy off-white head that rediced to a sudsy surface. 4.5/5

Taste (40%): Hop-forward, citrusy. Extremely smooth. A sweet-malt presence also detected. Aftertaste is a controlled slight citrus-bitter. I can picture myself on a Florida beach enjoying this. 4.5/5

Mouthfeel (10%): Probably a light-medium body. Velvety and silky on the tongue. Very smooth. Not a lot of carbonation on the tongue, although detectable. 4.5/5

Overall (20%): An outstanding IPA. This beer checked in at #10 for a 2015 blind taste test of 116 American single IPAs -- and totally deserves its spot. While the malty experience somewhat affirmed its 7.5% ABV, it frankly drank so much easier than that. And as the description states, it does pair well with spicy food! I may have had to make a special order in order to try this beer, but I am definitely a fan. 4.5/5