Fremont Brewing Back to the Future IPA 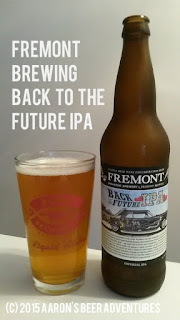 What's on the Label: "You hold in your hand the liquid representation of the Pacific Northwest craft beer community; a cross-border collaboration between Seattle's Fremont Brewing and Portland's Breakside Brewing. We decided to brew this beer for Seattle Beer Week and will release another beer for Portland Beer Week,,,stay tuned. This bromance beer is named Back to the Future IPA as a nod to the futuristic hops used in each of our releases; Jarylo and Equinox in Seattle and Azaaca and Ella in Portland. So, why did you collaborate? Thanks for asking. we came up with the idea to collaborate while traveling through the Mexican desert on a vision quest search for the little-known but potent Chulo Berry. Although the Chulo Berry eluded us that trip, we decided to dedicate what remains of our very existence to finding that damn berry. And since that idea creeped us out, we decided to brew these beers and chill out. So, pop the top, pour yourself a little adventure and Chill Out as your ride Back to the Future on this magic hop carpet ride!"

Where distributed: As of mid-July 2015, Fremont Brewing usually ships exclusively to Washington and Northern Idaho. In this case, Fremont shipped to Oregon due to its collaboration with Breakside Brewery.

Taste (40%): Packs a malty, floral and piney punch. Controlled citrus-bitterness on the aftertaste. Getting a dank experience. Hop-assertive and solid. 4/5

Overall (20%): A solid Double IPA. On the lower end of the IIPA ABV scale at 7%. I'm also impressed with this because I'm usually not the biggest fan of floral and maltier IPAs, preferring the citrus grapefruit-like IPA as a refreshing way to relax. I don't watch many movies, but I've seen the Back to the Future trilogy several times. Love the name and the label design. Perhaps it would have been that much better had Fremont and Breakside waited to release this beer on October 21, 2015. 4/5