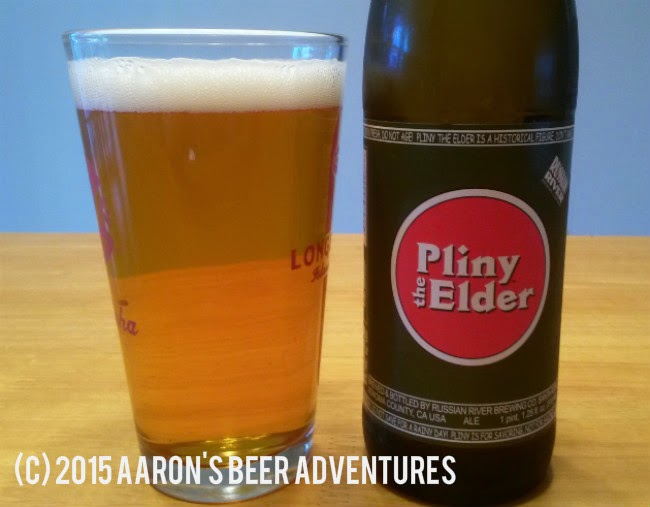 What's on the Label: "Pliny the Elder, born in 23 A.D., was a Roman naturalist, scholar, historian, traveler, officer, and writer. Pliny, and his contemporaries, created the original botanical name for hops, 'Lupus Salictarius' meaning 'wolf among scrubs'. Hop vines, at that time, grew wild among willows, likened to wolves roaming wild in the forest. Pliny the Elder died in 79 A.D. while saving people during the eruption of Mount Vesuvius. He was immortalized by his nephew, Pliny the Younger, who continued his uncle's legacy by documenting much of what his uncle experienced during the eruption of Mount Vesuvius. This beer is an homage to the man who discovered hops and perished while being a humanitarian."

Safe to say you should drink this right away: "Respect your elder. Keep cold, drink fresh, do not age! Pliny the Elder is a historical figure, don't make this beer inside the bottle one! Not a barley wine, do not age! Age your cheese, not your Pliny! Respect hops, consume fresh! If you must, sit on eggs, not on Pliny! Do not save for a rainy day! Pliny is for savoring, not for saving! Consume Pliny fresh, or not at all! Does not improve with age! Hoppy beers are not meant to be aged! Keep away from heat!"

Where distributed: Russian River only ships its beers to a handful of states, preferring to keep their beers local. Bottles might be extremely hard to find outside California. Russian River currently has distributors in California, Oregon, Colorado, and Pennsylvania (usually just kegs to put the beer on tap).


REVIEW:
Appearance (5%): Poured into a pint glass. Incredible clear-golden color. A few millimeters of head. It's like the "girl next door" attractiveness of beers. 5/5

Smell (25%): A sultry combination of citrus-grapefruit, tropical notes, and hops. This beer makes you wish you were at the beach. The smell alone makes you want to drink this all damn day. To me, it's as good as it gets. 5/5

Taste (40%): Probably the ultimate combination of pine, grapefruit, and hops. Incredibly dangerous, because this 8% beer drinks and tastes like 5% (and then of course it hit lightweights like myself but I didn't care). Any alcohol flavor is masterfully masked. Aftertaste is a sweet and slightly bitter grapefruit experience. Unparalleled smooth finish for a Double IPA. Any IPA lover would not hesitate in drinking two or more bottles in one sitting. 5/5

Mouthfeel (10%): Slight malty presence, but also refreshing and very easy to drink. Medium-light body with some lingering, pleasing bitterness. Definitely what an IPA should be. 5/5

Overall (20%): Pliny the Elder is one of the most hyped beers out there. But Pliny the Elder lives up to that hype when virtually no other beer could. If it was more readily available in Portland (aside from the select few pubs this beer can be found on tap), I would get as many bottles or growlers as I could. California liquor stores get one shipment of this beer per week, and the stock lasts only a few hours -- even with a limit of one bottle per person. It makes me wish Pliny the Elder aged well so I could store eleventy billion bottles for special occasions and/or share with my closest friends. Call me a fanboy of Pliny the Elder, but I am forever jealous of people who live right by the brewery. 5/5