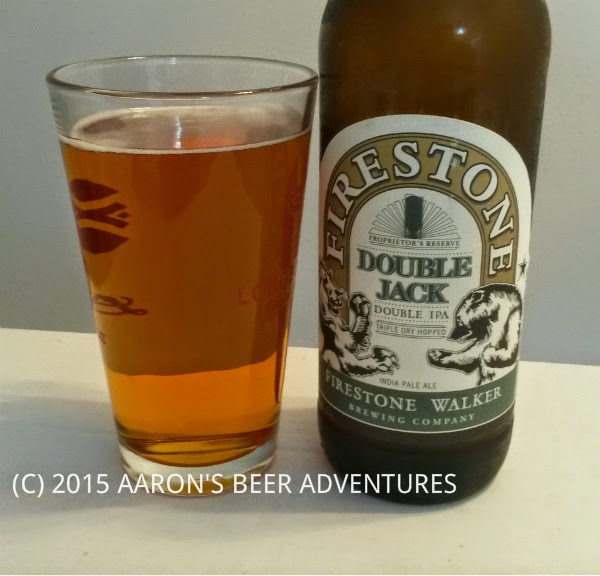 Brewed On Date: January 5, 2015 at 1651 hours. Website notes the date could be on the bottleneck, but I found mine on the bottom of the label.

Where distributed: Double Jack should be found in many bottle shops, taprooms, and pubs. Firestone has several critically acclaimed beers, from pilsners to stouts.

Taste (40%): Welcoming tangerine-grapefruit and pine flavors. Minimal trace of alcohol, which for 9.5% is outstanding. Well balanced. The alcohol gets more noticeable as I keep drinking, but that is kept to a minimum. It is very clean and refreshing. 4.75/5

Mouthfeel (10%): Although it had significant carbonation when pouring into a pint glass, only a slight carbonated experience here. Malty, medium body. Very smooth at the beginning, gradually heavier and maltier as I finished the pint. 4.5/5

Overall (20%): A superior Double IPA. The person at the bottle shop said it was one of her personal favorites, and I agree. One pint is usually good for me here, but I would still gladly finish the entire 22 oz. bottle in one sitting. For the quality, it's worth paying $8.49 or any equivalent price. Another must-buy for Double IPA lovers. 4.75/5