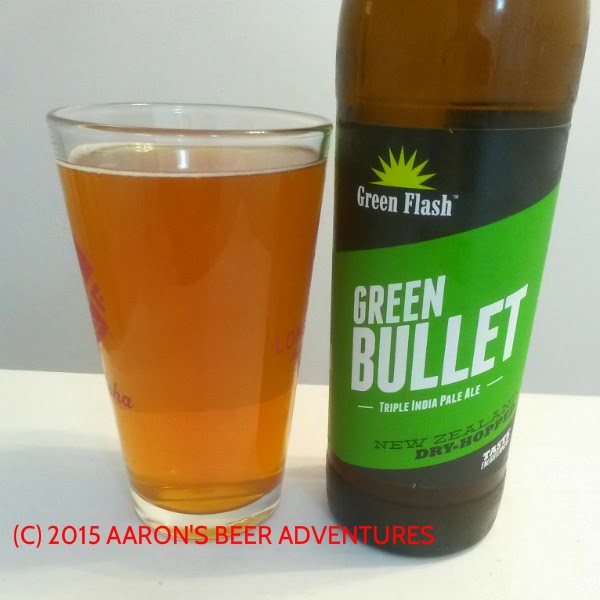 What's on the Label: Green Flash uses New Zealand-grown Pacific Gem and Green Bullet hops in this beer. "The aggressive yet well-balanced finish will stun the senses of even the most skilled hop hunter."

When brewed? Seasonal beer. Green Flash states that this beer is generally available September through December, but I still managed to find and buy this beer in late January.

Where distributed: Green Flash ships to several states in 12 oz. bottles, 22 oz. bottles, and kegs. The beer should be found in many bottle shops, taprooms, and pubs.

Taste (40%): Immediate pine and citrus notes. The bitterness really swoops in upfront, but it finishes quite well for a 10.1% Triple IPA. Alcohol was noticeable from the first sip and increased in presence with each subsequent sip. Early on, I caught some sweetness, which could have been the mango as advertised on the label. The aftertaste reminds me of grapefruit. This is not an IPA to routinely have a significant amount of, but it's a terrific first beer. 3.75/5

Mouthfeel (10%): Minimal carbonation, although I wonder if I'm drinking an older beer that's been on the shelf for a while. Malty, medium body throughout the entire drinking experience. Again, probably great if you just want the one beer and you're really wanting something to substance. Otherwise, there are other beers out there that I would default to. 3.75/5

Overall (20%): For a Triple IPA, this is some damn good stuff. It is a seasonal beer, so if you like Triple IPAs, get this one during the late fall and early winter months. The beer really hits you with every last bit of those 100+ IBUs. The 10.1% ABV gradually starts kicking in. I started feeling it 2/3 through the pint, but I'm considered a lightweight compared to other beer drinkers. I'd limit myself to one pint and finish the 22 oz. bottle the next day. At $7.99, I'd consider sharing this one with a drinking buddy. 4/5