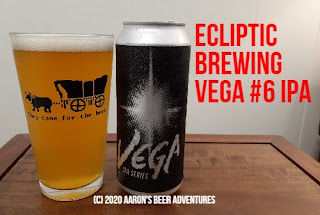 How sold: 4-packs of 16 oz. tallboy cans; on draft
Where bought: Unknown
Price: Unknown, gift from a friend 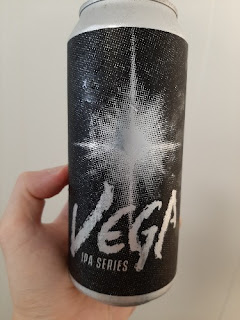 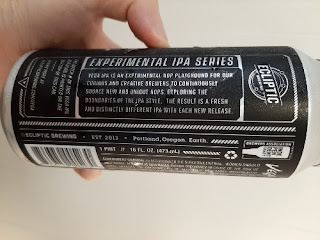 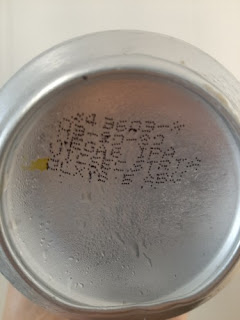 What's on the Can: "Vega IPA is an experimental hop playground for our curious and creative brewers to continuously source new and unique hops. Exploring the boundaries of the IPA style, the result is a fresh and distinctly different IPA with each new release. The batch number of Vega IPA is printed on the bottom of the can and the keg collar."

The bottom of the can also confirms there are Vic Secret, Strata, and Galaxy hops, with 6.5% ABV. That is most consistent with the #6 beer in the series.

Where distributed: Ecliptic Brewing distributes to select states. They have allowed Bruisin' Ales to ship Ecliptic's beer to virtually all U.S. states.

Smell (25%): Hoppy-piney-malty citrus-grapefruit, maybe some lemon. Certainly West Coast influence, but a more balanced feel. Aroma is there but will not hit you hard in the face. 4.25/5

Taste (40%): Mostly follows the nose. Blend of hoppy piney grapefruit up front, with the malt backbone coming in immediately afterward. Citrus continues strong into the aftertaste. Might feel more than its stated 45 IBU for some people. 4.25/5

Overall (20%): An excellent IPA. Sure, at the end of the day, it's another West Coast IPA. But it's done very well, with proper balance and wonderful flavors. I would definitely get this one again. 4.25/5